hakras
Chakras are nexuses of metaphysical or biophysical energy within the body. There are seven chakras, each situated at a different location in the body, albeit all located on a central vertical axis. It is derived from Hindu sacred texts.

Each chakra has a purpose and deals with a different emotion. As such, each chakra can be opened and closed depending on a given individual’s state of mind. When a chakra is open, energy is free to flow about the body. On the contrary, energy flow is restricted when a chakra is sealed. The chakras must be opened in a specific order, or the energy will not be able to flow.

The Air Nomads use a series of connected pools as an analogy to the concept of chakras. These pools, representing the chakras, were connected by waterfalls and channels, and were initially blocked by algae or muck, representing an individual’s own emotional debris. Due to this, the water, representing energy stagnated and could no longer pass through the channels. When the clogs of algae were removed, symbolizing the opening of the chakras, it allowed the water to flow through the channels again, streaming through each pool fresh and clear.

These are the chakras in the order one must unlock them. It requires great physical and mental discipline to unlock the chakras 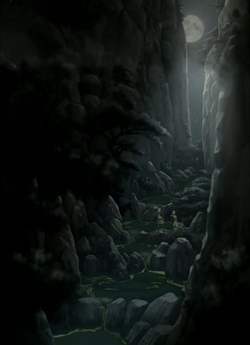